History of The Field

The original two fields were owned by the Coal Board (connected to their training centre) and the land was used as grazing for the pit ponies. Both fields were later bought by a local building firm, Vic Hallam, and then sold to Michael House Rudolf Steiner School in 1978, when their Heanor Road Ilkeston school was purchased by Weleda (the school had outgrown these premises).

Vic Hallam created a football pitch on Field 1 by bulldozing it level and removing all the topsoil. A local farmer, Mr Steeples, kept the pitch cut and used the rest of the field for growing hay and sileage. Attempts were made to grow wheat in Field 2, but yields were low, so Mr Steeple’s cattle grazed this field. 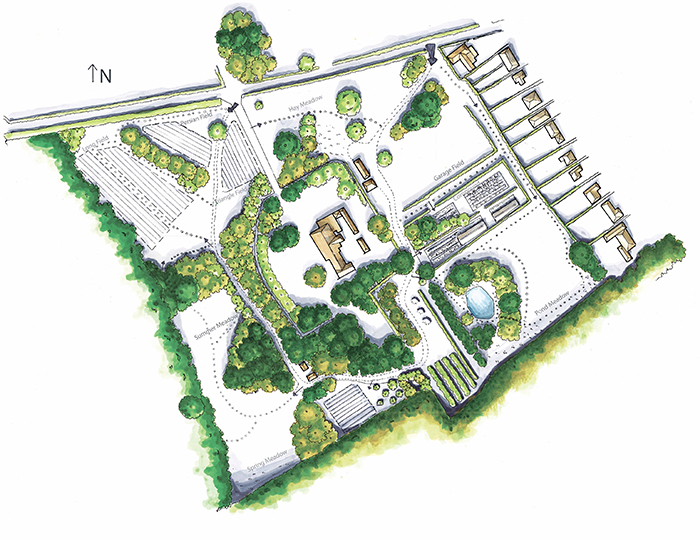 The school used Field 1 for grazing horses until Weleda rented what is now the Compost Field in 1985 to grow Calendula and their head gardener (Michael Bate) planted the shelter belt of birches and blackthorn. In 1987 Weleda purchased the rest of Field 1, imported topsoil to make the football pitch usable again, had some land drains laid and set out The Compound beds. The pond area with Flow-forms was properly developed in 1996.

Ari Blom (the school gardening teacher) planted a lot of the trees in Field 2 and subsequent teachers supervised various class activities including growing wheat, building a windmill, digging out a pond (by hand) and creating a small herb garden. There was always a St John’s celebration bonfire held here every year for the school community. One of the parents ran a small herb nursery in what is now The Orchard Field from 1995-97 and one parent grazed goats in what is now the Summer Meadow (until the battery of the electric fence was stolen). Weleda cultivated what is now the Long Field for Calendula and Oats. The Allotment Field was actually used for allotments which were rented out to parents and Weleda staff for many years and the Persian Field was rented by a market gardener to grow garlic and soft fruit.

Weleda bought Field 2 in 1996, primarily to help the school financially and to protect the existing Weleda land from any insensitive development. This brought the total area to 13 acres. There was a Goethean Study done at The Field in 1997/98, which resulted in a programme of hedge and woodland planting, meadow sowing and habitat enhancement, resulting in a diverse yet productive piece of land.

The entire area is bound, in a clockwise direction from the main entrance gate, by houses on Heanor Road, an old railway cutting/footpath leading to a football pitch, an area of land that was a theme park (The American Adventure and Brittania Park) but is now under development (Derbyshire Wildlife Trust’s Woodside nature reserve and planned housing/businesses). Following the boundary round, there’s another disused railway cutting and a lane leading to the Steiner School. On the other side of the lane are grazing fields and a riding stable. The whole of Weleda’s land encompasses a nursing home.