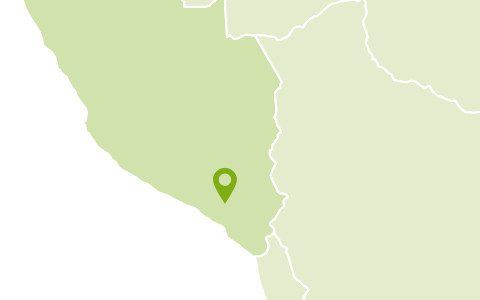 Sustainably sourced ratanhia from the Andes – used for dental care

Ratanhia (krameria lappacea) is an inconspicuous, bushy plant that grows in the arid landscapes around the city of Arequipa in southern Peru. In the harsh climate of the Andes range the ratanhia thrives, with its spreading, branched root system serving as protection against erosion of thin, dry mountain soil. The plant has played an important role for Weleda’s dental care products for over 50 years and is sustainably harvested in the wild.

Originally our focus was on the potential to cultivate the wild plant. Botany Professor Fatima Caceres from the University of Arequipa and German researchers Prof. Dr. Max Weigend and Nicolas Dostert launched a Public Private Partnership project (PPP) to research whether the ratanhia could be successfully propagated and grown. The first research phase, lasting until 2006 showed that cultivation of the plant is out of question for two reasons: it thrives only in interaction with host plants, withdrawing their water and nutrient salts and meaning that cultivation would require additional plant species in open fields, almost impossible in practice. Ratanhia’s specific biology presented the second hurdle – it grows extremely slowly, taking between seven and 15 years to become large enough even for the first harvest, so the investment and the maintenance effort in the field would be complex and impractical.

Under pressure from global markets

Weleda has also had to overcome another problem. As ratanhia is valued in the global market for medicinal plants, it is at high risk. In the world market at least 70,000 plant species are used with a harvest of half a million tonnes of medicinal plants each year. These are traded in the economic centres of the world, with confusing trade flows and no great incentive for the actors in this global business to lay their cards on the table, affecting ratanhia trade as it does that of other plant species.

According to official figures Peru exports around 40 tonnes of ratanhia a year, of which one ton goes to the Weleda Group, but many of the sources are not transparent. So in 2002 Weleda decided to enter into a broad-based cooperation agreement to set up a sustainable procurement project - with the conservation authority ‘INRENA’, scientists, collectors, dealers and the German ‘Gesellschaft für Internationale Zusammenarbeit’ (GIZ).

A sanctuary for wild plants

With this cooperation it was possible to create a sanctuary of 2,000 hectares in the Arequipa region for the sustainable wild collection of plants. A plant inventory was created using three sample plots, in order to intensively explore the natural regeneration and annual growing patterns of Ratanhia. Findings from these studies helped lay the foundations for a sustainable collection strategy. Initially only parts of the root were to be harvested, but researchers and Weleda’s plant buyers gradually developed a remarkably simple method – the collection area was divided into five sectors, in each of which every fifth plant could be harvested with their roots. As they harvest, the collectors also plant ratanhia seeds in the disturbed earth to ensure the continued regrowth of seedlings. Long-term observation and analysis shows us that this targeted natural regeneration of the plant population works well, and protects the future of the plant.

This project in which Weleda has now collaborated for almost 10 years with its German and Peruvian partners secures the ratanhia that is so important for Weleda’s dental care products. One ton of dried roots are harvested annually in the province of Chuquibamba. The ratanhia is collected in accordance with sustainable collective concepts and is processed in Europe. The collectors receive an agreed and fair wage, which assures them of an important extra income. Weleda gets a transparent, sustainable and secure supply and the company can use this valuable knowledge to support the development of other wild collection projects.

The effort we put in, and the support from our partners has not gone unnoticed. Peruvian conservation authorities intend to make ‘the sustainable collection method’ a law for all companies that want to export ratanhia. This means that only those who sustainably collect ratanhia are also allowed to export from Peru. In the near future this strategy could also be applied to other medicinal plants, which would be an important step towards sustainable biodiversity.