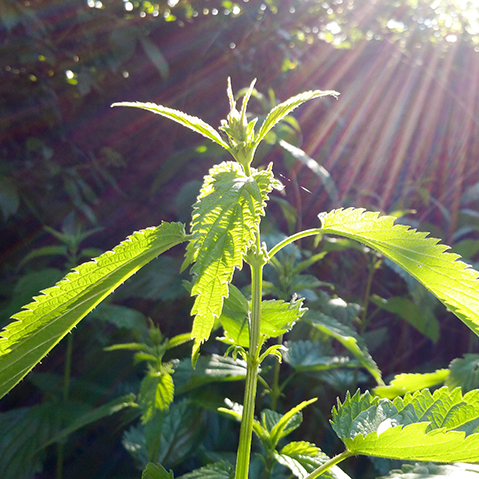 Weleda loves weeds – well, maybe not all of them: but many common weeds are just as capable of healing as their prettier floral cousins.

A gardener might tell you that a weed is just a flower growing in the wrong place, in which case Weleda has less weeds than most, because for us some are actually welcome in the garden. They may not be as pretty as some of our crops, but a weed can still be an ingredient for a remedy, or a helpful addition to the compost heap.

Our fields were previously horse paddocks, so we inherited thousands of curled docks –persistent, fast-growing and not very popular with most gardeners. Over the years we have dedicated many hours to digging them up for compost, as their leaves carry minerals drawn up from the soil.

Like most gardeners, Weleda’s team find it hard to love couch grass (agropyron repens), tickkling its long, white rhizome fingers through the ground and sending up new plants frequently, from just the tiniest shreds of missed root. The best quality couch grass is found in light loose soil, so one service it does is to tell us where these soils are on our meadows. Plus, we have to admit, an extract from the rhizomes can be used in a remedy for cystitis and bladder irritability. If only we didn’t produce so much more than required!

The Scarlet Pimpernel, anagallis arvensis, is a beautiful annual weed, found in light soil, but it can swamp other plants if given the chance. It used to be known as the ‘poor man’s weather glass’, closing its flowers as soon as the sky turns overcast. We can enjoy the pretty red flowers without guilt, as we also make a decoction of the dried herb for treating gastritis.

An old name for the happy daisy (bellis perennis) is bruisewort – however often trodden on, it always comes up smiling. If you want a perfect green lawn in your garden, you probably dislike the daisies, but we have the opposite problem – we have tried growing daisies in beds and found they prefer the grass! We prise out whole flowering plants to make a homeopathic remedy for aching overused muscles.

Unlike most gardeners, we’re pleased to see chickweed (stellaria media) a sure sign of loamy fertile soil. It gets its name from the affection hens and birds have for its thousands of buds and seeds. The plant contains iron, phosphorus, copper and potassium – good for the hens, and valuable additions to the compost heap. We make a remedy from the entire flowering plant for rheumatism.

Next time you’re sitting grumbling in your deckchair because a weed is flaunting itself after all your efforts, just stop and think – ‘it must be good for something’!