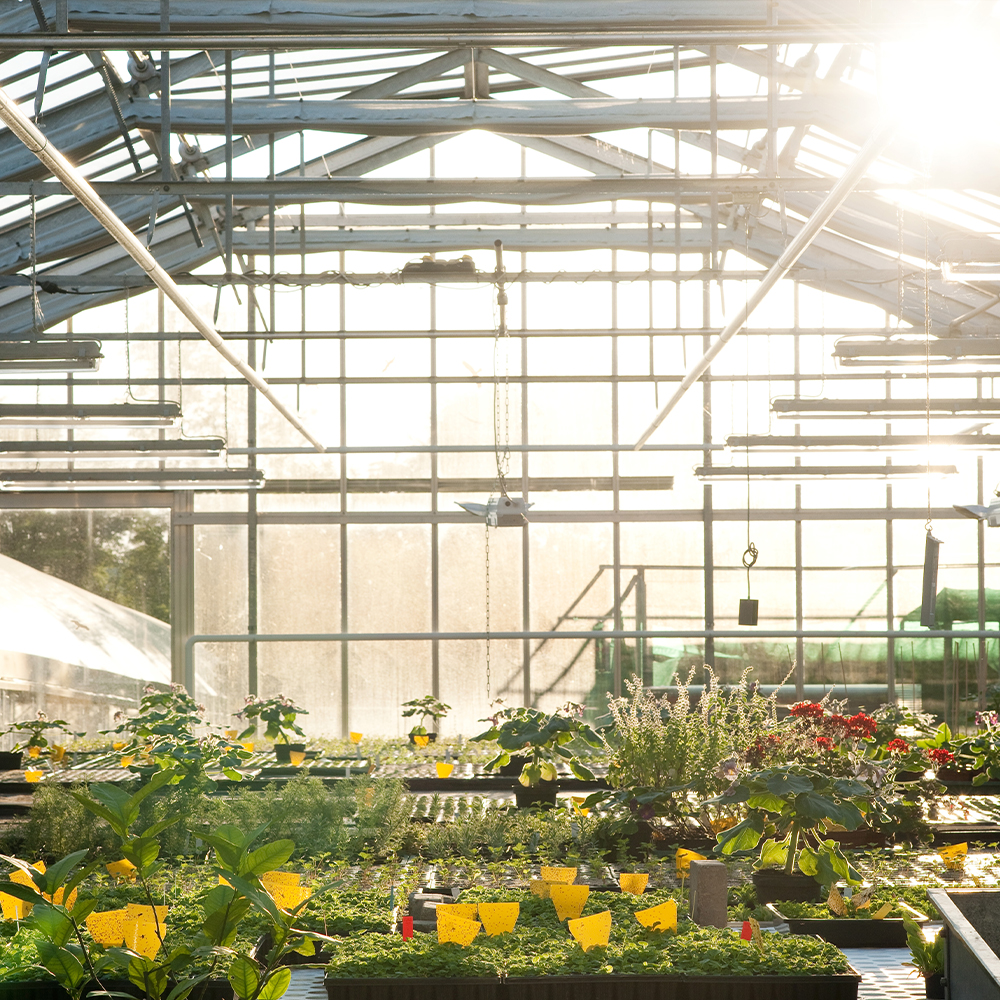 What makes soil fertile and healthy?

Why soil is a finite, precious resource that needs our protection

Over millions of years, our planet has developed a dynamic soil ecosystem. Myriad living organisms contribute to the carbon cycle and maintain soil fertility. But the soil is under threat and needs our support.

What does soil do for people and nature?

Healthy soils provide nutrients and are the basis for healthy food production. Soil quality and fertility affect how much fruit, vegetables and grains can grow. Even the plants we use in medicines and cosmetic products cannot thrive without healthy soil.

Soil filters water, binds pollutants and ensures clean drinking water. It allows water to sink into the ground and soaks up rainwater like a sponge. Intact soil can store many times its weight in water. Its absorption capacity prevents floods and droughts.

How soil and climate influence each other

Healthy soil is essential to climate protection. According to estimates, around 2,700 gigatonnes of carbon are stored in the soil worldwide. That’s more than in the atmosphere and all living biomass combined. Soil stores carbon in humus, peat, soil sediments and minerals; it is the largest carbon sink after the oceans. Millions and millions of soil organisms convert plant-bound carbon into humus. This organic, dark brown matter is roughly 50 percent carbon.

The global potential of soils to store carbon is an estimated 2 to 5 billion additional tonnes of CO2 per year. Sustainable tillage alone could save several million tons of CO2. 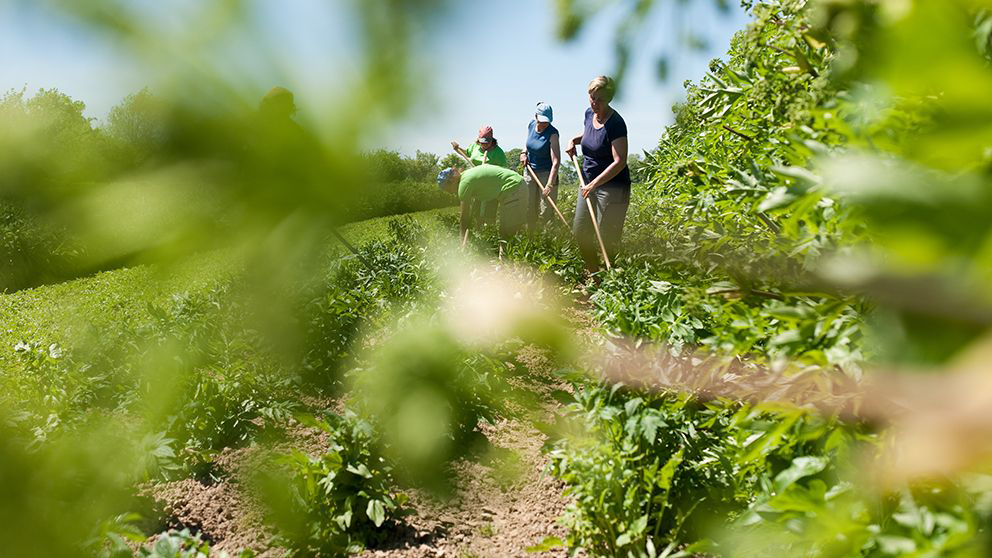 Soil is the basis of our existence

Soils regulate material and energy cycles, produce food and fodder, serve as building foundations, contain raw materials, and store information on natural and cultural history. Soil is one of the Earth’s most precious assets, and one of the most worthy of our protection: it is the basis of our existence. In everyday life, soil often escapes our attention, even while it is brimming with life.

- 3 to 5 times its weight is the amount of water that humus soil can store.

- 2,700 billion tonnes of carbon are stored in the world’s soils – about 3 times as much as in the atmosphere.

Humus formation is the constant process of transformation that takes place in the soil. It is the key to healthy soil, which has the power to become more fertile when its community of organisms, called the soil food web, work together. These tiny creatures and microorganisms decompose and mix in the soil, forming three-dimensional soil structures. Called clay-humus complexes, these have many pores, passages and cavities for air and water. They provide living creatures with enough air to breathe and plant roots with water and space to grow. Clay humus complexes keep the soil moist and make it looser, more porous, and more stable.

Humus-rich soils are more resistant to wind and water erosion, extreme weather and the adverse effects of climate change. There is much to be said for nurturing the many creatures of the underworld, giving them time and the proper nutrients to support their valuable work.

- 40 to 60 percent of the soil’s volume can comprise pore space, meaning the space between soil particles.

- 400 vertical tubes can be present in 1 square metre of soil well-populated with earthworms. Lined up end to end, they would measure over 1,000 kilometres long. 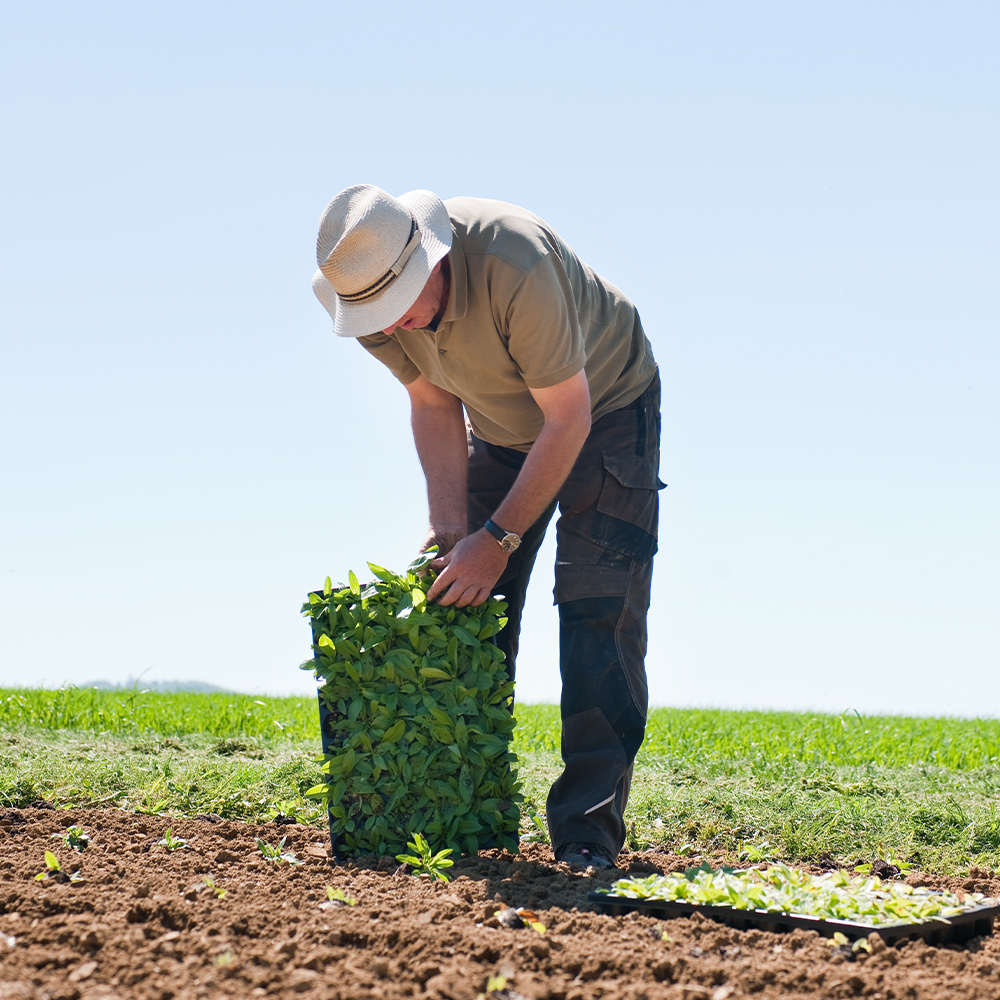 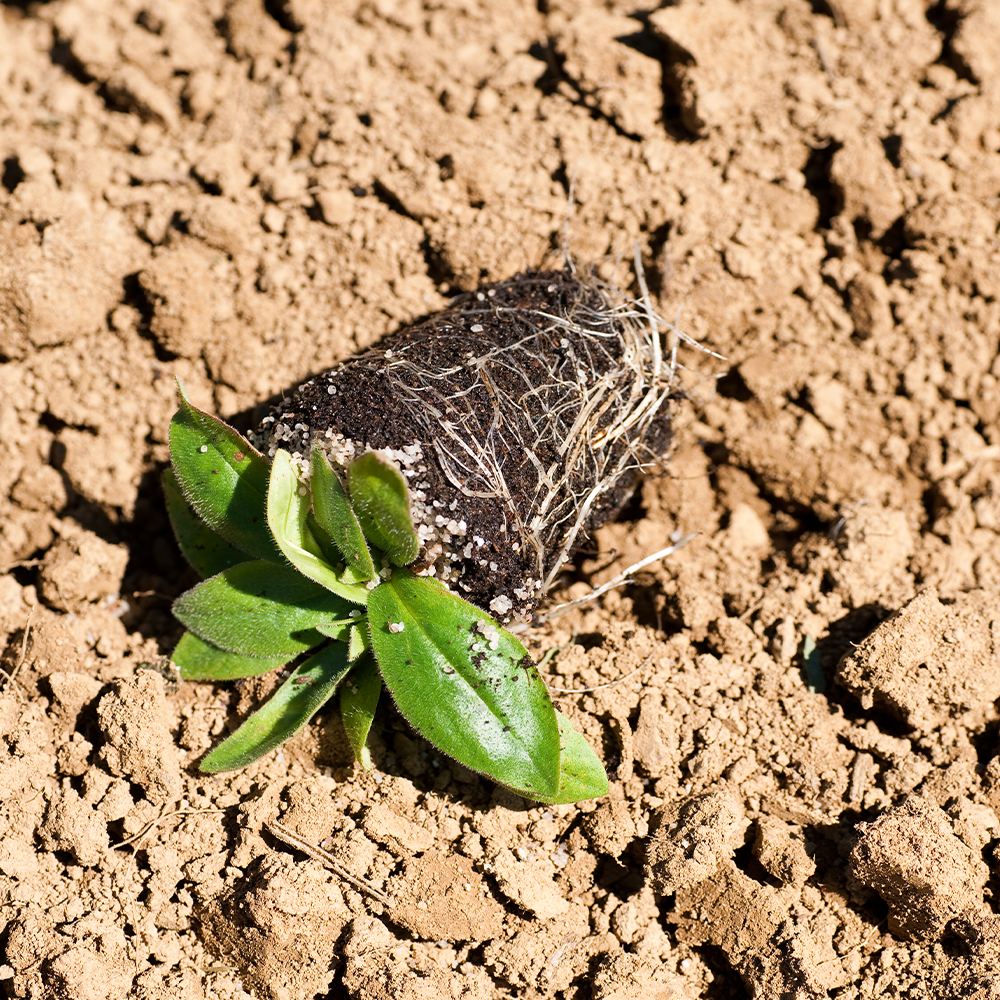 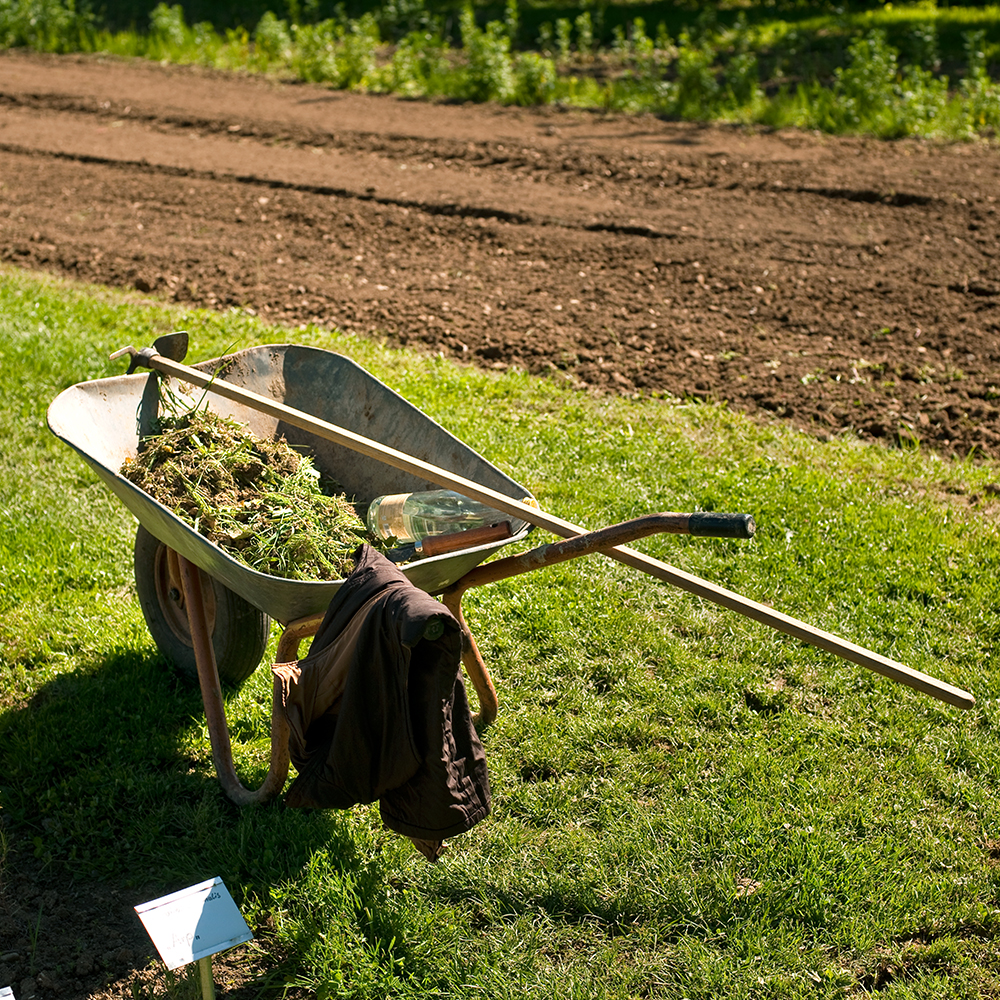 A handful of soil is a handful of life. Nowhere is life so densely packed. Except for a few earthworms, snails and beetles, however, we hardly ever see the vast majority of living creatures. And yet there is a tremendous diversity of species in the soil. Scientists have counted the individual organisms in the soil and found that biodiversity is nowhere greater than in the soil. Countless plants, animals, fungi and microorganisms are busy underground, transforming dead organic material into humus. They contribute to a healthy, productive ecosystem. One cubic metre of healthy soil – imagine soil in a cube, where each side is one metre long – is home to over 5,000 billion living organisms. By comparison, 7.8 billion people live on Earth.

While soil biodiversity is still poorly understood, scientists know that plant and animal microorganisms are the most common soil inhabitants. One gram of soil can contain 100 million bacteria with 4,000 to 7,000 different species. Together with fungi and algae, they decompose complex compounds, such as protein, cellulose and lignin, to make new nutrients, which provide nourishment for the plants – their own little universe of complex food relationships. 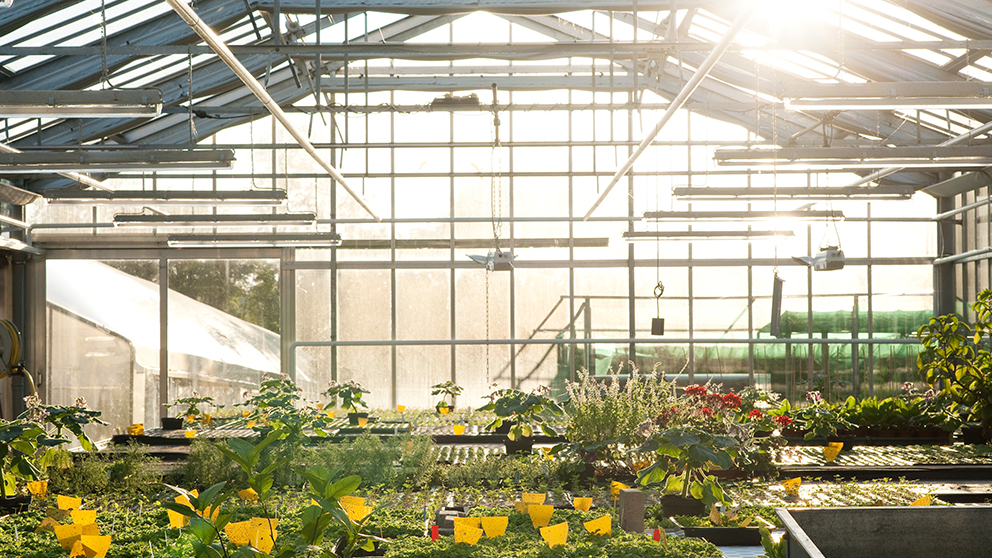 Earthworms play a crucial role in soil fertility. As they wander between the soil layers, they dig metre-deep tunnels in the ground, stabilizing them with their slime. These tunnels can reach down to the underlying parent rock. Air and water flow into their cavities and create room for plant roots to spread. The roots transport plant residues into deeper soil layers so that the humus content increases here as well. Earthworms literally till the soil, loosening and aerating the compacted soil. More meticulous in their work than any farming tool, they mix plant residues and soil particles. In addition, earthworms digest everything in the soil. In their intestines, organic matter combines with mineral components and microorganisms. Gardeners appreciate their excretions, and plants need them: clay-humus complexes enriched with micronutrients and macronutrients essential to plant nutrition, such as nitrogen, magnesium and phosphorus.

For all its diversity, soil is a finite, precious resource. Producing 5cm of soil can take 1,000 years. Only fertile soil can feed us over the long term and serve as a basis for nature.

Organisms that can live in 1 square metre of healthy soil, 30 centimetres deep:

Soil and climate influence each other. Experts assume that climate change accelerates soil degradation processes, resulting in increased CO2 leakage from the soil. This means that the release of CO2 increases global warming. However, soil organism activity depends on many other factors, such as water and nutrient availability, making predictions difficult. One thing is clear: healthy soils are better at storing CO2, bringing us closer to achieving climate protection goals.

But pesticides, artificial fertilizers, and heavy agricultural machinery damage the soil, causing the release of tonnes of greenhouse gases. Intensive tillage breaks up the clay-humus complexes, exposing and breaking down the organic matter they contain. It also causes more oxygen to enter the soil, stimulating the soil microorganisms and making them more active in processing valuable humus irretrievably into CO2. Lowering the water table in wet meadows to create arable land weakens the soil. Then the microorganisms rapidly degrade the soil’s carbon stocks.

- 780 billion tonnes in the atmosphere.

The Intergovernmental Panel on Climate Change (IPCC) attributes 31 percent of greenhouse gas emissions directly to agriculture and land use change. 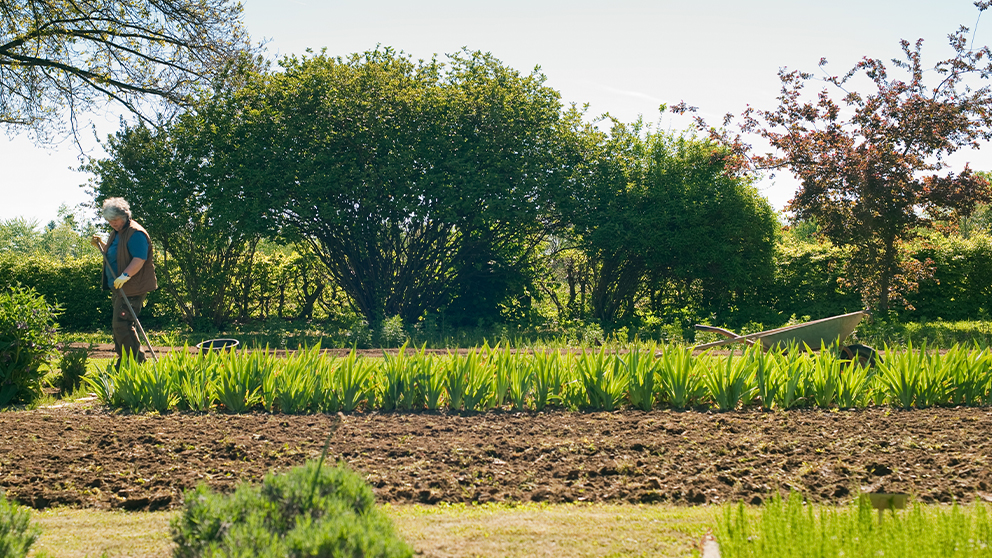 The current situation: soils in danger

At first glance, a handful of soil doesn’t look like much. Brown chunks, a few stones, maybe root debris and, if you’re lucky, an earthworm wiggling around in it. But how healthy is the soil – the home of bacteria, bugs and quite a few other creatures?

How healthy is the soil?

To judge soil health, we should think about what earthworms and other hard workers underground need for a good life. First, they need something to eat all year round: they like plants, plant residues and even composted manure. They don’t like poisons or when their home is turned upside down or compacted. Ploughing the soil can make the vertically arranged soil layers all mixed up. Suddenly the surface lacks food, which starves litter decomposers like snails, centipedes, beetles and woodlice.

There are about 46 different earthworm species in Germany alone. On intensively farmed fields, only a few species are active. The rest cannot survive in bare, depleted soil, whether in the garden or field. That means they cannot perform their central task as soil aerators and flood protectors.

- 70,000 square kilometres of soil in the Baltic Sea is considered biologically dead. The cause: Excess levels of nitrogen and phosphorous from agriculture. 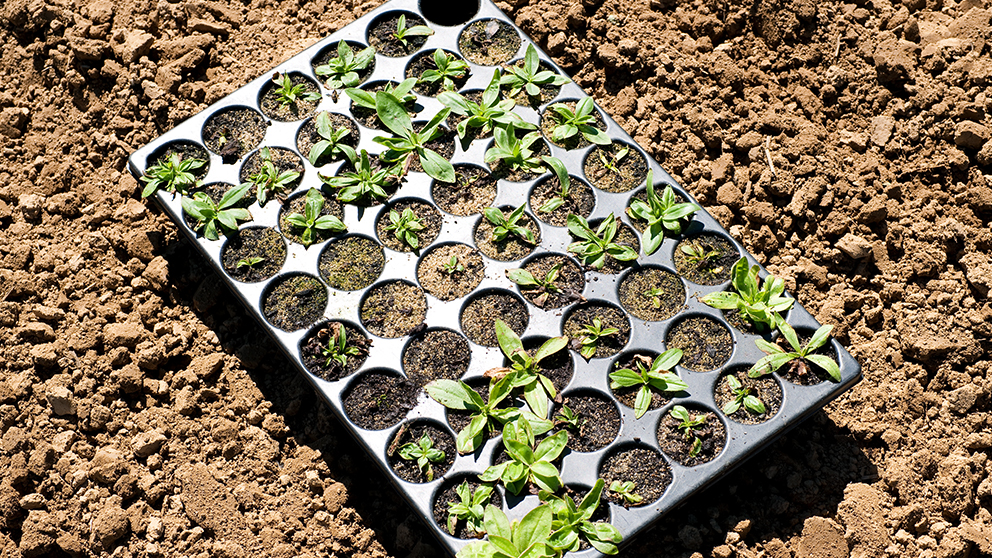 Europe’s soil is under stress. Its vitality is waning because of chemical fertilizers and sprays, overuse and erosion. The technical term for this is soil degradation. According to the FAO, the Food and Agriculture Organization of the United Nations, most soil has a humus content of between 2 and 10 percent. We use this thin layer as if it were an inexhaustible source – losing over 20 billion tons of fertile soil every year.

The soil itself wants plant cover, but people have denied this protection, exposing vast swaths of barren farmland to wind and water. They erode the soil, blowing or washing away the fertile layer in great clouds of dust.

In other areas, people build on and seal the ground, irretrievably destroying the soil. Overgrazing and forest clearing also damage the soil. Degraded soil can no longer fulfil its multiple functions. It loses its ability to absorb rainwater and channel it into the ground. Year after year, we hear about the impacts in the media: The groundwater level is sinking.

- 2,000 million hectares of soil are affected by human-induced degradation worldwide.

- 970 million tonnes of fertile soil are washed away by heavy rain in the EU every year.

- ¼ of the world’s land used initially for farming has been severely damaged or devastated.

- Four million hectares, mainly in the Mediterranean and Eastern European countries, are affected by soil salinization.

- Every day, 60 hectares of undeveloped land in Germany alone are converted into areas for housing and roads – that’s almost 31,000 soccer fields a year. 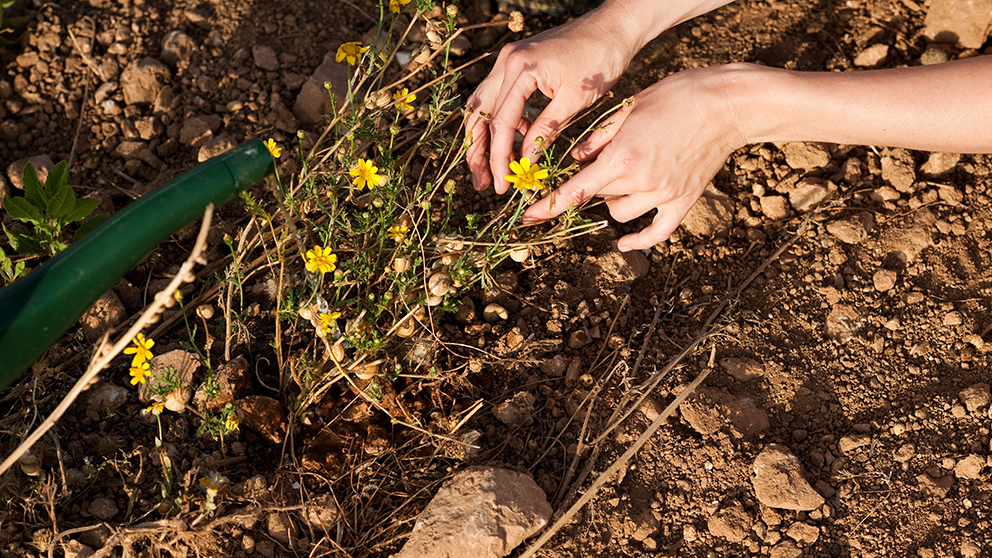 Industrial agriculture: overuse of the soil

Lush green meadows, waving fields of grain, magnificent corn stalks and yellow rapeseed as far as the eye can see: the sight is mesmerizing. But appearances are deceptive: the lushness of a field says nothing about the condition of its soil underground. Farmland has long since ceased to be the nutrient-rich foundation for healthy plant growth. That is because industrial agricultural systems don’t use sustainable methods but synthetic agents. Pesticides replaced natural pest control by soil bacteria and earthworms. Natural nutrient recycling was exchanged for artificial fertilizers. Monocultures, ploughing and fertilizing may increase crop yields in the short term, but soil health and fertility suffer in the long run. The soil is gradually degrading into a mere holding substrate.

- 16.7 million hectares of land are used for agriculture in Germany.

- 7.8 percent of that is organically farmed.